Primetime in No Time 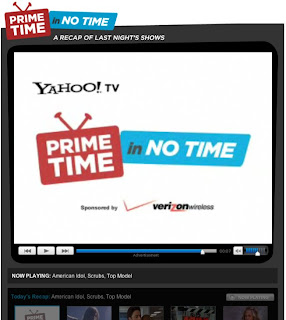 Last year, on my birthday, I got a call from Corey Moss who produces the original content on Yahoo! He was looking for someone to write on their new show, Primetime in No Time. It's a daily show that highlights the best moments in last night's primetime. Now, since I love sweet, sweet TV, it was a perfect fit and I started writing on the show that very night. Since then I've produced a few episodes, hosted a few episodes and written several hundred episodes. The show is hosted by comic Frank Nicotero, who brings it every single day and as it turns out is my neighbor in Studio City. Nick Paschal (Nick the PA) is our version of Chris Eliot and does a great job managing the day to day while Jason Fitzpatrick shoots, directs and edits it all together. Kyle Moss just joined the team to pick up the slack on the days when me and Corey can't or won't write and the Moss Sequel is kicking some cyber ass himself these days.

Our little webseries now has 100s of millions of viewers and peaks with around 9mm streams on a single day. Not bad for a bunch of TV junkies. Expect great things as Primetime expands the empire.


I'll post a clip of one of my hosting gigs shortly, but it's tricky because I think there are rules about Fair Use that prevent me from posting other people's work in certain forums but I gotta read up on all that.

Email ThisBlogThis!Share to TwitterShare to FacebookShare to Pinterest
Labels: Blog Posts, Primetime in No Time, Written By Mike, Yahoo